To honor John, the National Press Photographer Association featured John on the April 2012 cover of "NEWS PHOTOGRAPHER" and included a wonderful article outlining John's accomplishments and his thoughts on his career. John included CPCC in the article.

John may live in Chicago, but he keeps CPCC close in his heart. John graciously donated two of his seminal pieces to CPCC to honor the College for its impact on his life. John is also a donor to the CPCC John H. White Photography Endowment to encourage other CPCC photography students to "shoot from the heart" and "Keep In Flight!"

CPCC Theatre kicks off the season in September with "Godspell," a groundbreaking and unique musical with a message of kindness, tolerance and love.  "Sylvia," a romantic comedy about man's best friend, comes to Pease Auditorium in October, and in February, the country music of Roger Miller will fill the Halton when "Big River" brings Mark Twain's classic story of Huck Finn to the stage.  The season will conclude with August Wilson's powerful drama, "Fences" as part of the College's annual celebration of the arts, Sensoria.  You won't want to miss any of these performances, so purchase your tickets now.

August 27, 2012
Please note that all CPCC campuses will be closed September 1st-7th for Labor Day and the Democratic National Convention.

CPCC Charged to Lead the Way in Math Programs

Charlotte Business Journal reported this great story! CPCC will receive $300,000 over two years from the N.C. Community College System for its work on the math curriculum improvement project.

The initiative will help align the math curriculum with what's being taught in North Carolina's public schools as well as in the UNC System. 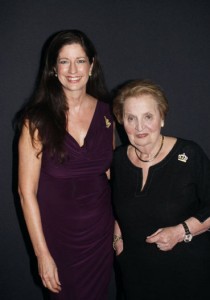 It is said that Madeleine Albright's jewelry was a means to underscore diplomatic messages and foreign policy. In the photo below, Fabi is sporting one of her favorite pins and Madeleine Albright is wearing a pin that was designed in honor of her visit to the Queen City.

In addition to being the president of SPARK Publications, CPCC Alumna Fabi is a wonderful promoter of CPCC in the community. Fabi speaks highly of CPCC and  gives of her time and talent to current students. In addition, Fabi is a  donor to the CPCC Alumni Annual Fund.

August 7, 2012
Update your contact information
It's not too late to and be entered into the drawing
for an iPod Shuffle

Help CPCC celebrate 50 years of alumni success by entering and updating your alumni and employment information. By completing the form, you will be entered into a drawing for an iPod Shuffle.

You, our alumni, and your accomplishments are the reason that CPCC is celebrating its 50th year as a superb educational force recognized at the national level.

Note: CPCC employees are not eligible for the drawing.

CPCC Has High Standards - And Our Pass Rates Confirm It

Congratulations to the graduates and high fives to the instructors!

College-Prep Kids in Charlotte are Opting for an Alternative Route: European-Style Apprenticeships

August 7, 2012
NPR recently featured the apprenticeship partnership between Central Piedmont Community College and some international businesses that operate in Charlotte.