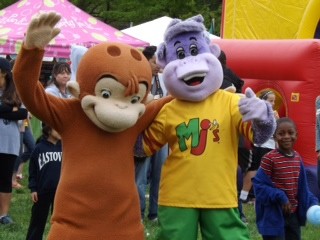 To those of you who came out for the Charlotte Skyline 5K Race and family fun run to help raise money for scholarships, THANK YOU!

It was a bit overcast, however there were a lot of happy participants and plenty to entertain the families as they waited for their friends and families to cross the finish line. These two guys helped entertain too!

Central Piedmont Community College (CPCC) will present Alain S. Miatudila Sr., faculty/research operations manager for the Department of Engineering Technology and Construction Management at UNC-Charlotte, with the 2013 Richard H. Hagemeyer Educational Advancement Award at its traditional spring commencement ceremony on May 16 at Bojangles' Coliseum. The award recognizes a former CPCC student who has significantly benefited from experiences at CPCC and whose efforts have helped the community.

A native of the Democratic Republic of Congo, Miatudila arrived in the United States as a refugee in 1996 with aspirations of studying civil engineering. He did not speak English. After taking a full-time job as a cashier at a Handy Pantry gas station, he realized he would need to learn English to overcome the language barrier he was experiencing with customers. An opportunity to attend free, English as a Second Language (ESL) classes at CPCC presented itself; Miatudila immediately enrolled.

After completing the ESL classes at CPCC, Miatudila continued to work on his English through everyday conversation. Despite having limited English language abilities, he applied to CPCC in 1998 and was admitted as a student in the college's Civil Engineering Technology program. He was 28 years old. With the assistance of CPCC instructors, many of whom he today considers his mentors, Miatudila graduated from CPCC in 2001 with a degree in Civil Engineering Technology.

In addition to being an instructor at UNC-Charlotte, he is currently a student, taking classes toward a doctorate degree in Infrastructure and Environmental Systems at UNC-Charlotte. He remains active in his industry and the local community, serving as a member of the Institute of Transportation Engineers, the American Society of Civil Engineers, the Congolese Community of Charlotte and his church.

In his spare time, he can be found in CPCC's Admissions Office, encouraging today's young adults to attend the college where he built his academic foundation.

"I find it a privilege to teach and mentor students. There is no limit on the amount one can learn," says Miatudila. "When I look at the accomplishments I have achieved to date, coming from a Third World war- torn country to having to learn English as an adult, I am proud of the hard work I put in. I am thankful for God, the support of my wife Ma-lkay, our children Grace and Alain Jr., and for the opportunity and foundation I received at CPCC. Attending CPCC helped me become successful in my professional and personal life."

A scholarship will be granted to a CPCC student enrolled in the College's Civil Engineering Technology program the area of study that most closely reflects Miatudila's background.

April 5, 2013
Fifty community college students were chosen to be a Coca-Cola New Century Scholar; Al Ghrary was selected as the highest scoring student in North Carolina. As a result, CPCC will be recognized at the American Association of Community Colleges Convention and Al Ghrary will receive a $2,000 scholarship.

"Riyam draws from her love of learning and her innate intelligence to succeed," said Amanda Capobianchi, associate dean of Student Life at CPCC. "She is among our most active students on campus and is an excellent student who sets very high standards for herself. Her self-discipline is unmatched and I am extremely confident in her success for the future." Full story
Central Piedmont Community College Foundation Central Piedmont Community College Foundation

Sensoria, CPCC's annual celebration of the arts runs from April 12 -20 and includes many free events for arts enthusiasts. Film screenings, art exhibits, musical performances and lecture series are just part of what's free at CPCC during Sensoria. Make sure to check out the full schedule, but here are a few of the free events:
Central Piedmont Community College Foundation Central Piedmont Community College Foundation