November 19, 2014
CNN recently visited CPCC's Central Campus to learn more about the Apprenticeship 2000 program, an initiative that equips CPCC students with today's manufacturing skills, helps them graduate with no debt and guarantees them a job after graduation. 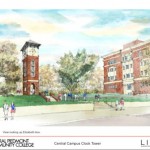 Looking to take its place among the prominent college and university landmarks across the Carolinas, the Allen Tate Tower will serve as a focal point on CPCC's Central Campus. The Allen Tate Tower will stand approximately 48 feet tall, with a base of about 144 square feet. The tower will be constructed of brick and cast stone and feature a four-sided clock face approximately six feet in diameter.

The tower will be the result of a generous contribution from H. Allen Tate Jr., founder and CEO of the Allen Tate Co., the Charlotte-based real estate firm. Weather permitting, construction of the tower will be completed in early 2015, sometime during CPCC's spring semester. Little Diversified Architectural Consulting is providing the design work on the project.

"The Allen Tate Tower will be a wonderful addition to CPCC's Central Campus," said Dr. Tony Zeiss, CPCC president. "In discussions with Allen, he conveyed a feeling that our Central Campus, while lovely, lacked a signature landmark, the kind that students and alumni will grow to love and identify with. And we could not agree more.

"Allen Tate has been a long time, generous benefactor and friend of the college. This tower will serve as a college landmark and a monument to his abiding support," Zeiss added.

The clock tower will be located on Elizabeth Avenue, between the Terrell Building and the Elizabeth Classroom Building. The prominent site will give students, employees and passing motorists a clear view of the tower.ate has been a long time, generous benefactor and friend of the college. This tower will serve as a college landmark and a monument to his abiding support," Zeiss added.

"CPCC is an outstanding institution that prepares students for employment and lifelong education. This tower will serve as a great symbol of achievement and reminder of the hard work and commitment the students have made to achieve their goals," said H. Allen Tate Jr.
Central Piedmont Community College Foundation Central Piedmont Community College Foundation 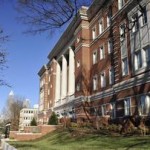 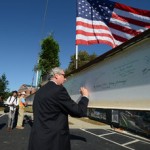 Central Piedmont Community College (CPCC) has completed its five-year "Legacy and Promise" campaign, raising a grand total of $63,894,128 in cash and in-kind contributions. The campaign, which had a $30-million goal and honored CPCC's 50th anniversary, probably has set a fundraising record for U.S. community colleges.

"We could not be more thrilled, proud and grateful for the way this community responded to the campaign," said Dr. Tony Zeiss, CPCC president. "The many contributions will touch every part of the college and benefit generations of students. The amazing success of the campaign is simply astounding. Our campaign chairs did a wonderful job as did our campaign steering committee and the staff of the CPCC Foundation."

"We are extremely grateful to the generous donors who made this remarkable achievement possible," said Campaign Chair Patricia Rodgers. "Their participation in the campaign is testimony to the broad recognition of CPCC's importance to our community. Through their generosity and vision, these donors will help guarantee future generations of students are afforded needed opportunities."

"The results of this campaign are particularly heart-warming when you consider it kicked off during the height of the 'great recession,'" Zeiss added. "So many individuals, foundations and companies somehow found it within themselves to say, 'CPCC and its mission are important, and we will do what we can to give support.' We know of no other community college campaign that has raised more than $63 million. We are grateful and truly humbled."

Since its founding in 1963, CPCC has educated and trained more than 1.5 million people. Today, the college serves more than 70,000 individuals a year, making CPCC one of the largest institutions of higher education in the Carolinas.

"We are grateful to the Charlotte community for its generous support of the campaign and for its recognition of the important work being done by the college in Mecklenburg County," said Tommy Norman, president of the CPCC Foundation. "The campaign's success will benefit thousands of students through expanded scholarship resources and new and enhanced instructional and career-training programs. The return on donor investment will be significant."
Central Piedmont Community College Foundation Central Piedmont Community College Foundation

November 4, 2014
CPCC earns recommendation for initial accreditation from the Accreditation Commission for Education in Nursing

The CPCC Nursing program received exemplary remarks from the Site Visit Team. ACEN* representatives specifically noted the strong support and resources provided by the college and the nursing program; the beauty of the Belk and Health and Education Buildings; the work ethic, devotion and passion of CPCC's nursing program faculty; the commitment of the program's instructors and students; and the quality of the program's clinical facilities.

"Our faculty have always known that our graduate nurses were high quality; that has been evident in our Graduate and Employer Surveys for years," said Lisa List, chair of CPCC's Nursing program. "But it is great to have that affirmation from an outside agency like the ACEN to show our graduates, current students, employers and the public that our program is top notch. The faculty is committed to continuing the high standards of accreditation and producing great graduate nurses."

The Commission on Accreditation of Allied Health Education Programs (CAAHEP) has awarded continuing accreditation to CPCC's Medical Assisting program. In their remarks, the audit team specifically mentioned being impressed with the program's quality, processes, laboratories and equipment, as well as the professionalism of its staff. The accreditation is valid for a ten-year period, the maximum length of time that may be awarded.

The Medical Assisting program is also pleased to announce that for the 13th consecutive year, students who completed the program achieved a 100-percent pass rate on the Certified Medical Assistant Examination, administered by the American Association of Medical Assistants CMA (AAMA). The CMA (AAMA) certification is considered the highest credential for medical assistants and is recognized across the United States. 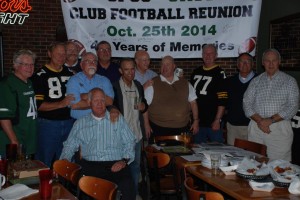 Recently a group of CPCC alumni gathered to celebrate the 40th Reunion of the CPCC Chapter of  the NC Football Club Association. This group of football players shared their stories and mementos of games played and friendships forged. All of these gentlemen added how important CPCC was to them and the wonderful educational opportunity it provided. It was a great evening and wonderful reminder that Central Piedmont Community College was, and still is, known for creating opportunities through education.