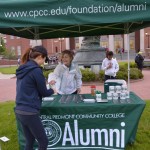 The rain didn't keep the alumni runners from stopping by the CPCC Alumni booth to reconnect. And a number of very excited  "May 2015″ alumni came by to talk about their upcoming graduation. All spoke the same message, that their education at CPCC has meant a great deal to  them. All the warm words took the chill out of the air and made the race that much more memorable. Thank you to all who raced and helped raise scholarship money for the next generation of  alumni.
Central Piedmont Community College Foundation Central Piedmont Community College Foundation 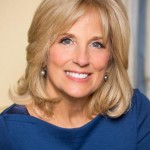 She is a full-time professor of English at Northern Virginia Community College and has been an advocate for the critical role community colleges play in developing the nation's work force.

"Biden will speak directly to our graduates' hopes and aspirations and the challenges they have faced along the way," says CPCC President Tony Zeiss. "She will know our students well because she has taught so many community college students in her career as an educator."

The Charlotte school's graduation ceremonies are scheduled for 4 p.m. May 14 at Bojangles' Coliseum. CPCC anticipates as many as 1,800 students will graduate in May. Of those, about 800 will participate in the ceremony.

Zeiss and Biden both spoke at a conference in Switzerland last fall. At the time, they discussed the possibility of her being a commencement speaker at CPCC.

Biden has been an educator for more than three decades, and she has described community colleges as "one of America's best-kept secrets."

In 2012, she traveled across the country as part of the "Community College to Career" tour that focused on successful industry partnerships between community college and employers.

She hosted the first White House Summit on community colleges and frequently visits campuses and meets with students, teachers and industry representatives around the country.

Biden also works to bring attention to the sacrifices made by military families and to raise awareness around areas of particular importance to women, including breast cancer prevention. 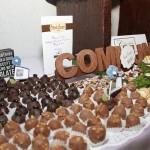 Guests can expect to indulge guilt free as all proceeds support Community Link's efforts to help individuals and families obtain and sustain housing. 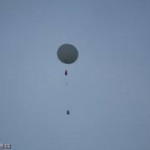 Central Piedmont Community College is one of four Charlotte-area community colleges where students will design weather balloons and payloads financed by NASA.

Science, technology, engineering and math students and faculty from the schools each got grants of up to $10,906 from NASA. The grants will pay for equipment such as barometric pressure and temperature sensors, cameras, radio transmitters and small computers.

Six-member student teams will design, test, launch and recover the balloons and their payloads. The balloons will soar 20 miles to the edge of space.

The teams will launch their balloons at 7:30 a.m. April 18 at the Iredell County Fair Grounds in Troutman.

Central Piedmont Community College (CPCC) will present Joe Vagnone, owner of J. Vagnone Enterprise LLC, and the Charlotte area managing director for ENLIGN Business Brokers, with the 2015 Richard H. Hagemeyer Educational Advancement Award at its spring commencement ceremony, on May 14, at Bojangles' Coliseum. The award recognizes a former CPCC student who has benefited significantly from experiences at CPCC and whose efforts have helped the community.

Vagnone first attended CPCC in 1984, graduating in 1987 with an Associate in Applied Science Degree in Hotel and Restaurant Management. Vagnone credits the foundation he received at CPCC with who he is today a recognized expert in building business and assisting buyers and sellers of main street businesses in many industries.

As a CPCC student, Vagnone became involved in the college's student body activities. He was elected president of the college's Hotel & Restaurant Association, and was later voted student body president. As president, Vagnone travelled the country, touting the merit of CPCC's Hotel & Restaurant Management Program. This exposure to restaurants located in larger venues such as Texas, Washington, D.C., and Chicago, redirected Vagnone's career path he no longer wanted to manage a restaurant; he wanted to own one.

As a result, he decided to start Joe's Place Restaurant in 1985, two years before he graduated. There, he grew the franchise to 40 units, becoming one of the most successful closed-market office building restaurant models in the Southeast. After finding success in the food service industry, he sold the business in 2006, opting to shift his professional focus to starting a brokerage firm Jvagnone.com, now strategically aligned with ENLIGN Business Brokers dedicated to helping others achieve the American dream of becoming an entrepreneur.

Today, Vagnone spends his days advising and assisting investors and business owners in buying and selling a broad range of businesses in the Carolinas. He provides management services and marketing advice to owners of businesses with up to $5 million in annual gross sales or less. His advice to others is leveraged from a hands-on track record and having owned more than 40 restaurants and 75 businesses over his 30-plus year career.

"To be considered an expert in the field in which I studied at CPCC signifies to me the value of the education and the connections that are still serving me well today," said Vagnone."To be recognized by CPCC with the Richard H. Hagemeyer Award is especially meaningful since I attended the college when he was president."

In his spare time, Vagnone is a small business advocate. He currently serves as the Business Growth Vice Chair for the Lake Norman Chamber of Commerce, and in the past he created the Mayor's Small Business Advisory Group, was a member of the National Federation of Independent Business, and a corporate liaison for the Lake Norman Regional Economic Development Board.

Vagnone has been referenced in articles by area publications, including the Lake Norman Citizen and is a published author. In addition, he is an on-air personality who may be heard co-hosting the "Local Biz Now" radio show with Wayne Bidelman on 100.7, WSIC FM, and "Lake Matters," an Internet-based streaming show on small businesses in the Lake Norman region. He is active in his son's extracurricular activities, including helping found the Porter Ridge Athletic Association in 2005, where he has served as coach, organizer and commissioner. Currently he helps with a number of sports, such as football and lacrosse, as needed.

"As a graduate of CPCC, Joe continues to give back to his community through several local community service projects and more," said Bill Russell, president of the Lake Norman Chamber of Commerce. "If I could only recommend one alumni member from CPCC to be considered for this prestigious award, it would be Joe Vagnone."
A scholarship will be granted to a CPCC student enrolled in the college's Business Administration, Certificate of Specialization in Entrepreneurship Program the area of study that most closely reflects Vagnone's background.
The Hagemeyer Award takes its name from Dr. Richard H. Hagemeyer, CPCC president for 23 years, who led the college from its beginnings as a trade school with 1,200 students to the state's largest community college.

CPCC is excited to announce it has launched

Career Hub, a new section within CPCC's website designed to help students and all other job seekers explore everything related to careers, such as:
This FREE resource was created for residents in Mecklenburg County and beyond seeking to learn more about the local job market, employers who are hiring, career choices and the skills needed to secure their dream job.
Central Piedmont Community College Foundation Central Piedmont Community College Foundation 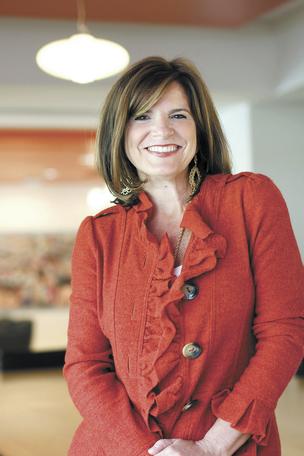 "If we train them, we have a better chance of keeping them," Appleby says. And she's looking for rivals to join the cause, telling me the industry benefits if and when more ad shops decide to help train and attract the next generation of workers instead of fighting for the same people again and again. "We have made a commitment to growing our talent."
Central Piedmont Community College Foundation Central Piedmont Community College Foundation