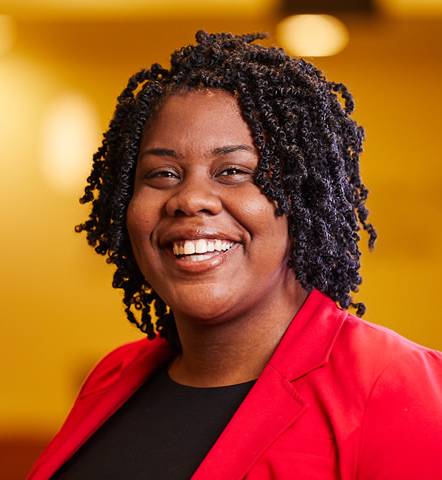 Despite high school success, Kiara Palmer wasn't ready for the rigors of a four-year university. Therefore, she chose to begin her higher education journey at Central Piedmont in the fall of 2008.

While at Central Piedmont, Palmer demonstrated exemplary leadership skills both as part of the college's Phi Theta Kappa honor society and as a peer advisor in Career Services. She also gained hands-on experience by learning the inner workings of the television industry through an internship at CPCC-TV (now WTVI PBS Charlotte).

This experience helped her learn more about her area of study in journalism and mass communication. It opened doors at other radio and television stations, including WFAE, where she served as an intern. Soon after, Palmer graduated in May 2011, earning an Associate in Arts degree and transferred to UNC-Chapel Hill, where she hit the ground running.

"Because of my time at Central Piedmont, I was ready for the rigors of UNC-Chapel Hill," she said. "I was confident in my abilities to do the work and anything that was required of me."

Since graduating from UNC-Chapel Hill in 2013, Palmer served as a TV assignment editor for WRAL-TV (Raleigh, NC) and WSOC-TV (Charlotte, NC).  She then transitioned from broadcast news and worked for the National Institutes of Health as a communications specialist.

In May of 2019, Palmer earned her Master of Arts degree in strategic communications from American University in Washington, D.C., and is currently working as an account supervisor at Ogilvy Health, an international integrated public relations agency.

Palmer says she owes much of her success and personal development to Central Piedmont. Without the professors, college staff, and academic programming, Palmer says her journey wouldn't have been as fruitful.