Cummins to Train Engine Techs at CPCC in Huntersville

HUNTERSVILLE Central Piedmont Community College and engine-maker Cummins Inc. announced a deal Monday to develop a technician training program at CPCC's Merancas Campus in Huntersville. Plans include creating and equipping a diesel and heavy equipment lab at the campus.

Indiana-based Cummins makes diesel and natural-gas powered engines, and related technologies. The company has 48,000 employees worldwide and plans to bring apprentices to Huntersville from across North America and the Caribbean.

It's the latest apprenticeship program of its kind to find a home at CPCC. "CPCC has a national reputation for apprenticeship programs Siemens, Blum, Ameritech, Daetwyler, etc., and the college already has a diesel and heavy equipment program. So, CPCC is a good fit for Cummins' needs," spokesman Jeff Lowrance said. "We think the program will be a great addition to our current Merancas Campus offerings.

Starting in January 2015, groups of 15 Cummins apprentices will take classes at CPCC in five-week blocks as part of a four-year program. The apprentices will be full-time Cummins employees and will spend the equivalent of two years at CPCC, where they will learn how to build and maintain the company's diesel engines. Students also will take math, English, communication and workplace psychology courses.

Cummins will pay for tuition, fees, books, tools and other expenses. Students who complete the program will receive an associate's degree in Diesel and Heavy Equipment Technology and be certified by Cummins in engine and/or power generation.

"We're looking for career-oriented men and women with a desire to work with Cummins technology," David Taylor, Cummins' apprenticeship program leader, said in an announcement Monday. "There are plenty of opportunities to make good money, gain experience and move up in a growing company."

It wasn't clear how much Cummins would invest at CPCC in Huntersville. Lowrance said CPCC would open the program using its current equipment and facilities. Cummins is expected to donate equipment within the next few months, but the value has not been announced.

"CPCC is proud and excited to partner with Cummins on their innovative Technician Apprentice Program," Tamara Williams, dean of the Merancas Campus, said in the announcement. "The program will offer each student a wonderful opportunity and provide the foundation for a great career, while establishing a talent pipeline for Cummins. We look forward to welcoming the first group of students in January." 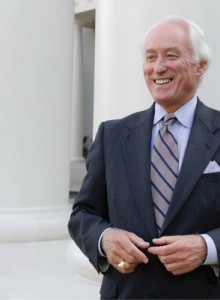 Jim Rogers, a CPCC alumnus and a long-time business and civic leader in Charlotte, has been honored with The Order of the Long Leaf Pine for his lifetime of service to North Carolina. The award, conferred by Gov. Pat McCrory, was presented at the annual meeting of the Charlotte Region Commercial Board of REALTORS on Dec. 4 at Quail Hollow Country Club.

In his nominating letter, Charles Campbell, Managing Partner of Brackett Flagship Properties in Charlotte, stated that Rogers "embodies the qualities of service, character and integrity that are expected of recipients of this award."

Rogers, 72, has contributed to the vibrancy of Charlotte in a number of ways the past 45 years. He was a founding partner of Cauble and Co. of Carolina in 1982, a commercial mortgage banking and real estate investment sales brokerage firm that financed a number of major N.C. and S.C. projects. In 2005, he was a co-founder of Flagship Capital Partners (merged with The Brackett Co. in 2010 to form Brackett Flagship Properties) which develops, acquires, manages and leases medical office buildings across the Southeast. He also helped form in 1994 the Charlotte Region Commercial Board of REALTORS, the predominant commercial real estate voice in the Charlotte region and served as CRCBR's first President.

While still active at Brackett Flagship, he has pulled back from day-to-day business activity. Over the years, he has given an extraordinary amount of time and energy to a wide range of causes benefiting business, education and the arts. Among the organizations he has served in various leadership roles: Leadership Charlotte, YMCA, Arts & Science Council, WTVI (channel 42), Goodwill Industries of the Southern Piedmont, UNCC Athletic Foundation, Central Piedmont Community College, Hospice & Palliative Care Charlotte Region and the Lynwood Foundation.  He currently chairs the Administrative Board at Myers Park United Methodist Church.

Rogers received his B.S. and MBA degrees from East Tennessee State University where he was named Alumnus of the Year, received ETSU's Award of Honor and was installed in the Hall of Fame of the College of Business and Technology. Rogers also graduated from CPCC.

Created in 1965 to honor those who helped shape the life of North Carolina for good, The Order of the Long Leaf Pine is the highest civilian honor for a NC citizen.  It has gone to a wide range of Tar Heels including William Friday, Billy Graham and Bob Timberlake.